On Wednesday evening, April 7, Appalachian State's AEPi chapter, the Center for Judaic, Holocaust, and Peace Studies, Appalachian's Hillel chapter and the Temple of the High Country will mark the beginning of this year's Yom HaShoah (Holocaust Memorial Day) with an online commemoration and readings of names of European Jews murdered by the Germans during the Holocaust. The program will begin at 8:00 p.m. EST. 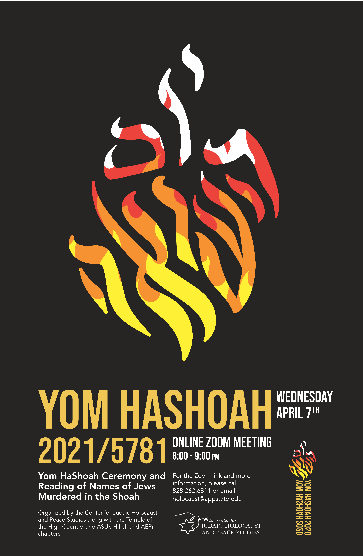 The U.S. Congress established the Days of Remembrance as the nation’s annual commemoration of the Holocaust. This genocide was the state-directed, systematic destruction of six million European Jews and millions of others, ranging from homosexuals and Soviet prisoners of war to Roma to people with real and imagined disabilities, by the Germans and their collaborators between the years of 1933 and 1945. Since 1982, the United States Holocaust Memorial Museum created by Congress as a permanent living memorial to this genocide’s victims, has organized and led the national Days of Remembrance ceremony in the U.S. capital.

The recalling of the names of the deceased and murdered is not only an important part of Jewish religious practice, it also serves as a practice for individuals of all backgrounds, faiths and cultures to commemorate the victims. Much more than a devastating part of Jewish history, the Holocaust is truly an event in global history. The Holocaust’s crimes of unimaginable cruelty offer opportunities to recommit to the need for respect for all people and to reflect on the moral responsibilities of individuals and communities today.

In response to the ongoing pandemic, to avoid community spread, and to keep everyone safe, the program on April 7 will be held on a ZOOM platform. To register and receive a copy of the program, please click here.

The registration form also has a section for anyone who would like to volunteer for a reading of names or a commemorative text. For more information, please contact the Center at 828.262.2311 or holocaust@appstate.edu.