The Ramifications of the Kavanaugh Appointment for the U. S. Supreme Court and Beyond 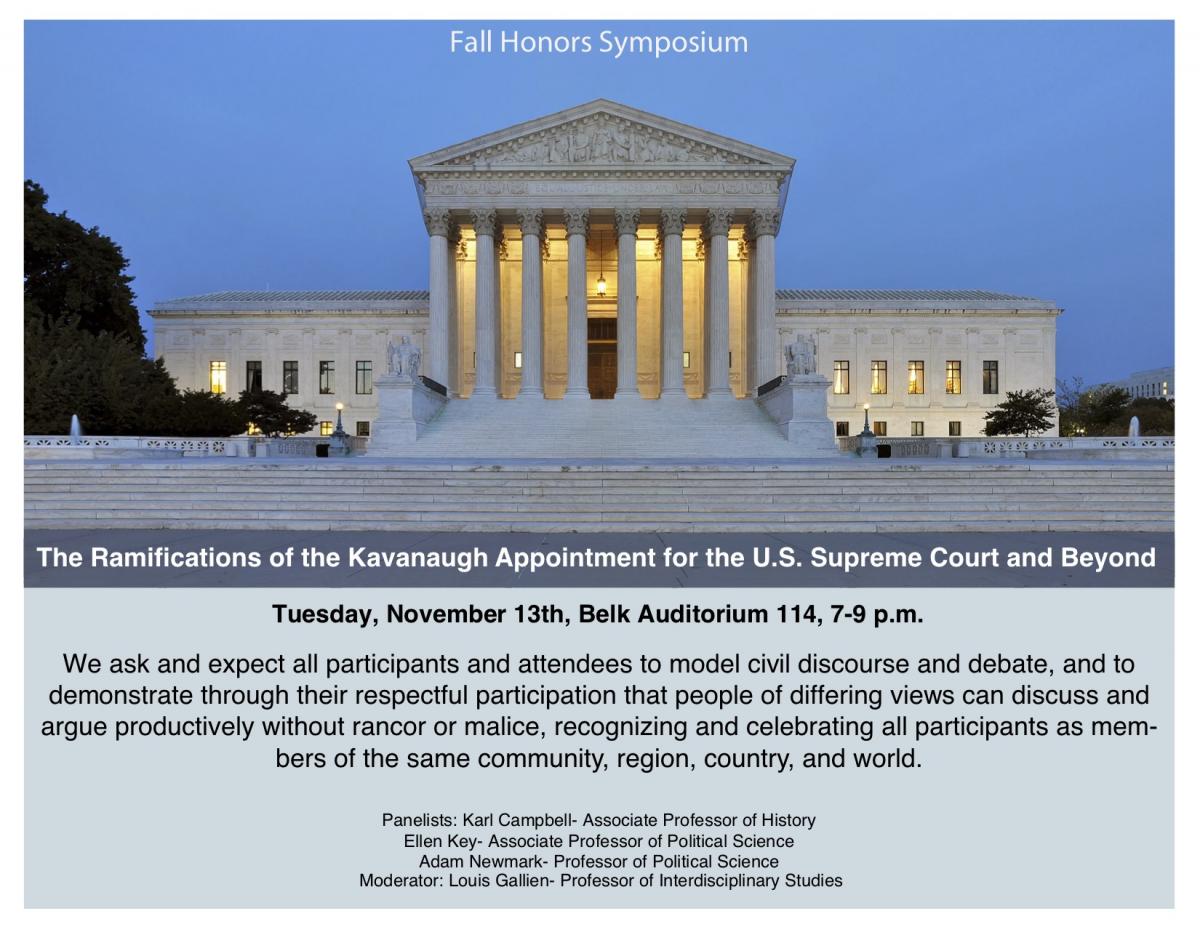 Last year the Honors College, in collaboration with the Department of History, held an all-university symposium on issues that arose from the Charlottesville demonstrations of August 2017. The success of the symposium has encouraged us to continue collaborating with academic departments to organize additional symposiums as important matters arise in the intellectual, political, and civic landscape of our region, nation, and world.

Our goals are three:  to bring together experts, students, and other members of the university and community on topics or issues of vital regional, national, or international significance; to model civil discourse which demonstrates that people of differing views can debate and discuss professionally, without rancor or malice; and to create dialogue outside the classroom between members of the university and the Boone communities.

On November 13th, we will again sponsor an all-university symposium, this one on the Ramifications of the Appointment of Justice Brett Kavanaugh to the U. S. Supreme Court, featuring three Appalachian faculty members as speakers and plenty of time for discussion.

Karl Campbell is Associate Professor of History in the Department of History at ASU. He received his Ph.D. in History from UNC-Chapel Hill. His latest book is Senator Sam Ervin: Last of the Founding Fathers (UNC Press, 2007), for which he won the North Caroliniana Society Book of the Year. He is currently working on a manuscript titled: Carolina at the Crossroads: Governor Luther Hodges and the Transformation of the New South.

Ellen M. Key is Associate Professor of Political Science in the Department of Government and Justice Studies. She received her Ph.D. from Stony Brook University in New York. Her areas of teaching and research focus on judicial politics, public opinion, and public methodology. Her work has appeared in numerous scholarly outlets including: Political Behavior, PS: Political Science and Politics, and the Justice System Journal. She is also an affiliate faculty member in the Gender, Women’s and Sexuality Studies Program.

Adam J. Newmark is Professor of Political Science in the Department of Government and Justice Studies. He received his Ph.D. from UNC-Chapel Hill. He teaches courses on American politics, parties, and interest groups, state politics, and public policy. His research has focused on political scandals, and on how groups work in coalitions to achieve their objectives. His research has appeared in a number of scholarly publications on political science, public administration, and public policy, including: P.S. Political Science and Politics, Social Science Quarterly, the Journal of Politics, Interest Groups and Advocacy, State Politics and Policy Quarterly, Policy Studies Journal, and the Journal of Public Administration, Research, and Theory.

Moderator: Louis B. Gallien, Jr., Professor of Interdisciplinary Studies, holds a dual appointment in the Honors College and the Reich College of Education. He is the founder of the Southern Studies Minor within the College of Arts and Sciences, and teach courses in the Honors College and Watauga Residential College that focus on the South and issues and topics centered on African American culture. He has previously taught at two HBCU institutions--Spelman and Morehouse Colleges—both members of the Atlanta University Center. He is a former dean and department chair, and co-editor of two books on African American pedagogy and achievement patterns, one published by Teachers College Press and one by Allyn and Bacon Publishers.