Honors sophomore and Chancellor's Scholar Aidan Keaveney participated in the National Science Foundation’s Physics and Astronomy Research Experience for Undergraduates (REU) at Louisiana State University (LSU) virtually this past summer. Through this program, Keaveney, a double major in physics and mathematics, has been conducting research in gravitational astrophysics. Keaveney shared how fortunate he feels as an Honors student at Appalachian to have been able to participate in this program, and in scientific research, in general, over the past three years. With this strong foundation Keaveney plans to pursue a doctorate in experimental physics after he graduates. He shared,

“Research continues to provide the most challenging and fulfilling learning experiences I’ve had. For me, there’s nothing quite like contributing, granted in a very small way, to the scientific body of knowledge that humanity has been developing since it first looked to the stars. In addition to the undeniable objective and soft skills I have learned by conducting research, the things I get most out of research is knowing that I’m challenging myself to the fullest extent possible and contributing to humanity’s greatest journey: scientific exploration.”

For his REU research project he worked to develop new computational techniques to characterize the impact of seismic noise on our ability to detect gravitational waves. He explained,

“Gravitational wave science is arguably among the most important new fields not just in physics, but all of science. Scientists for centuries have been searching for ways to see further into the universe. We’ve built bigger telescopes, launched satellites, and we’ve even sent spacecraft to other bodies in the solar system and beyond. Until relatively recently, scientists were limited to electromagnetic radiation, that is, light, as our way to see what’s beyond our world. Now, we have more ways of ‘seeing’ what’s going on, like cosmic rays, neutrinos, and most recently, gravitational waves. These four phenomena are all messengers that we use to gather information about the universe. With the advent of these new methods, a new era in science has been ushered in known as multimessenger astronomy, where we can study astronomical phenomena from multiple perspectives.” 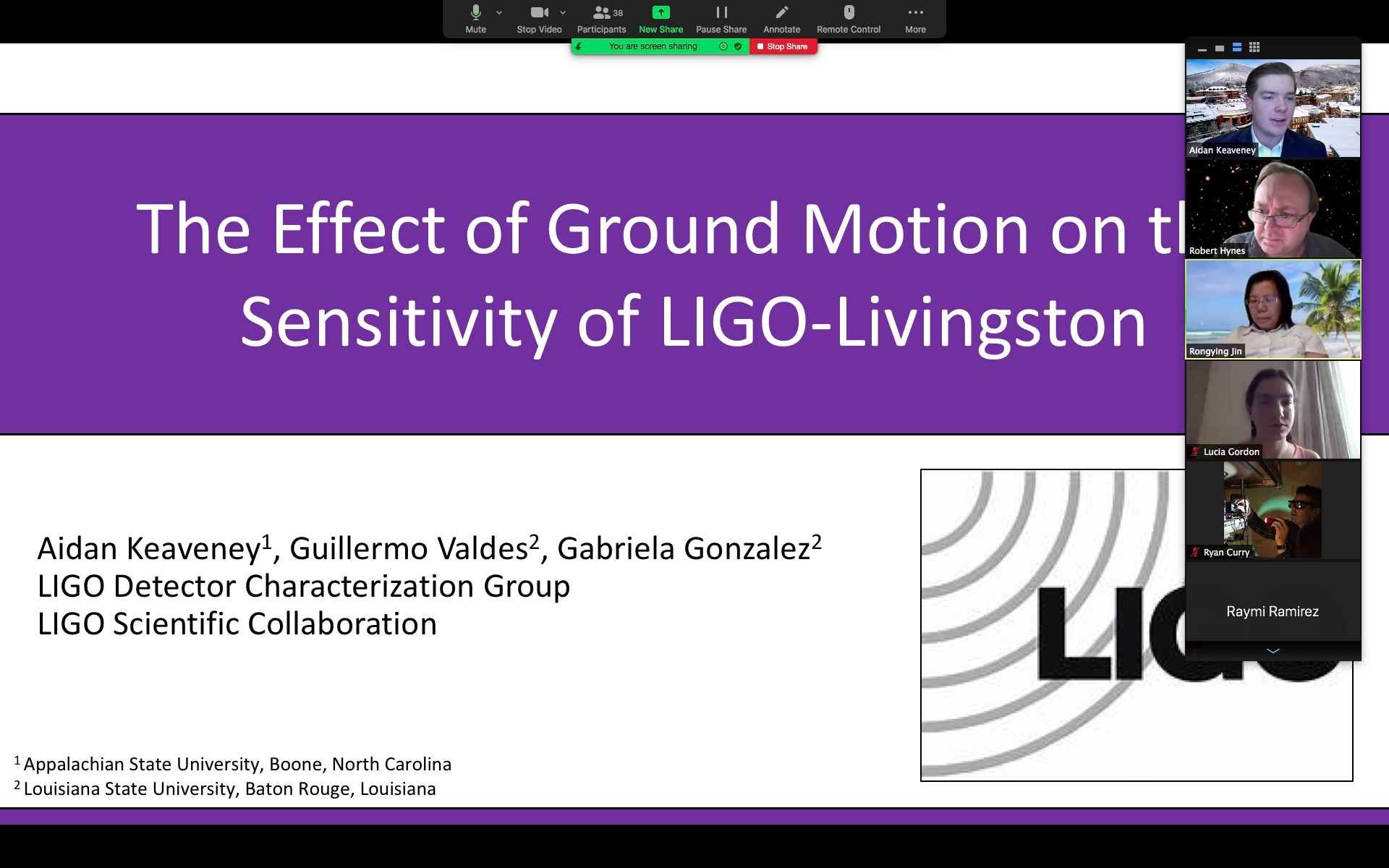 Photo above shows Aidan Keaveney presenting his research entitled “The Effect of Ground Motion on the Sensitivity of LIGO-Livingston” at the end of summer symposium for the students in the National Science Foundation’s Physics and Astronomy Research Experience for Undergraduates (REU) at Louisiana State University (LSU). Photo taken from the Zoom recording by Dr. Robert Hynes, professor in the Department of Physics at LSU.

Since this summer, Keaveney has continued his work on this research project with his LSU REU mentors. Dr. Gabriela Gonzalez, professor, and Dr. Guillermo Valdes, postdoctoral researcher, both in the Department of Physics and Astronomy, lead the Laser Interferometer Gravitational-wave Observatory,or LIGO Detector Characterization group at LSU. This is a subgroup of the LIGO Detector Characterization group in the LIGO Scientific Collaboration (LSC), a scientific collaboration of international physics institutes and research groups dedicated to the search for gravitational waves. Keaveney described,

“The LSC is one of the largest scientific collaborations in the world. The LSC studies gravitational waves, or ripples in the fabric of spacetime produced by cataclysmic events occurring throughout the universe, such as two black holes colliding. Gravitational waves were first proposed by Albert Einstein over a century ago as a necessary result of his theory of general relativity, but the first gravitational wave wasn’t detected until 2015, when LIGO observed the collision of two massive black holes. Dr. Gonzalez was the LSC spokesperson at the time, and was honored as one of the top ten scientists in the world in 2016 by the journal Nature.”

Keaveney further noted the significance of this research in answering fundamental questions about the earliest stages of the universe and the Big Bang. He explained,

“We may be able to see the gravitational waves produced by the Big Bang with sensitive enough gravitational wave detectors. The earliest moments in the universe are still not fully understood, despite the remarkable advancements astronomers have made in the past century. By building bigger and better gravitational wave detectors, we may be able to see beyond what we are able to see with light to determine what was really going on at the beginning of the universe. These types of fundamental questions about the nature of the universe are what I am most passionate about, and this question in particular is what drew me to the LIGO Scientific Collaboration. I feel very fortunate to have been able to begin working in this rapidly developing field at this exciting moment in its evolution.”

Keaveney is especially grateful for the opportunity to participate in this research and in the NSF’s Physics and Astronomy REU at LSU. He stated, “I’d like to thank the National Science Foundation for supporting both the LSC and the LSU Physics and Astronomy REU. I am also indebted to Dr. Rob Hynes and Dr. Rongying Jin for directing the REU program and making sure the rest of the students and I in the program had an excellent virtual experience. I’d also like to thank my mentors Dr. Guillermo Valdes and Dr. Gabriela Gonzalez for their support, as well as the entire LIGO Detector Characterization group at LSU and the LIGO Scientific Collaboration.” 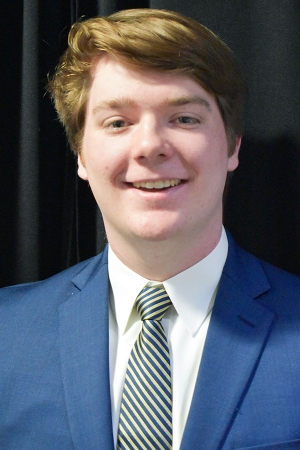 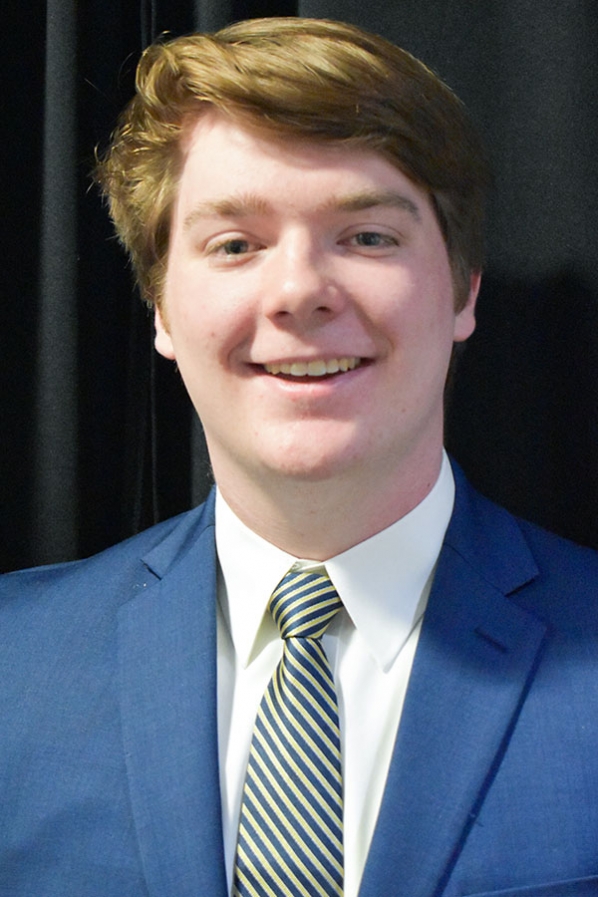