Honors Devin Hoffman (’17) is a former Chancellor’s Scholar and 2016 Barry Goldwater Scholarship in Excellence in Education recipient who majored in geology and worked with Appalachian State University's Department of Geology Professor Andy Heckert as his mentor. Upon graduation in May of 2017, Hoffman received a funding award from the National Science Foundation's Graduate Research Fellowship Program (GRFP). With that, he is currently pursuing his his doctorate in the Department of Geosciences at Virginia Tech University with Dr. Sterling Nesbitt as his advisor. 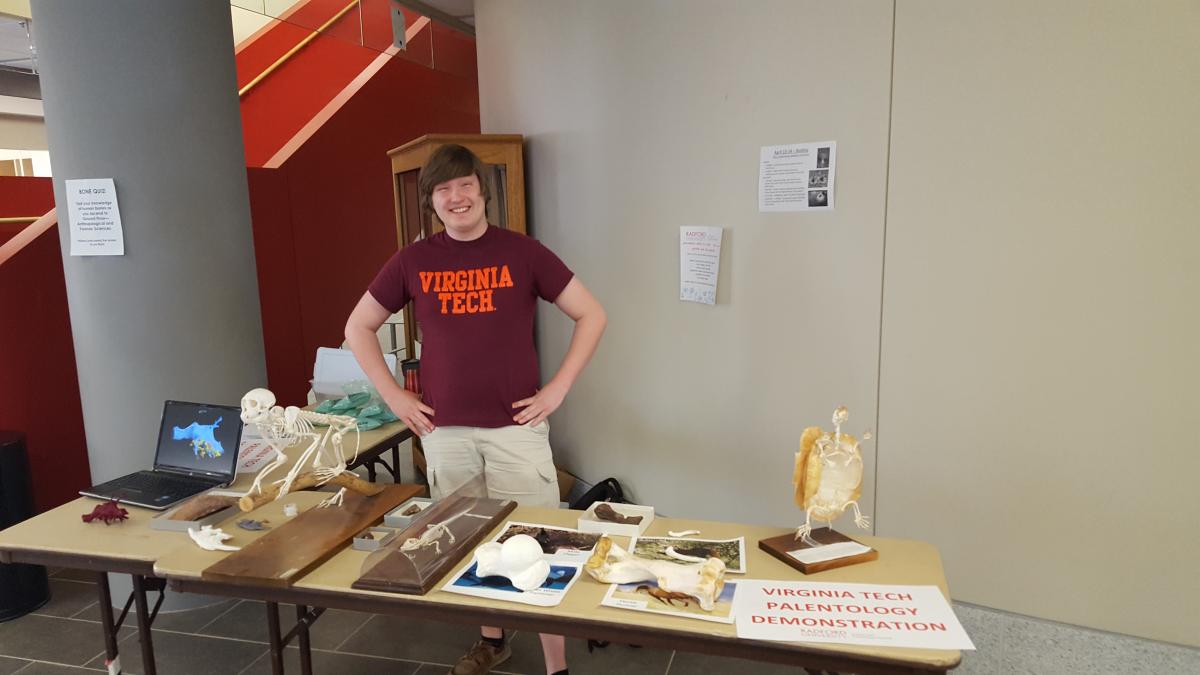 Over the past year, Hoffman has been very busy at Virgina Tech. Below he provides an update on his academic and professional endeavors. He explains that his Honors experience at Appalachian has provided the foundation for all of his pursuits.

“Writing a thesis was great practice for writing scientific papers, which is something I will be doing the rest of my life as it is a major part of being a vertebrate paleontologist. I have also been able to write two scientific papers based on my work in my Honors thesis, which gives me a head start in my publications and a competitive advantage. From my research I learned how to ask deeper questions. A part of what I was looking at in my Honors thesis is now being incorporated into one of my Ph.D. dissertation chapters.”

The the first chapter of Hoffman’s Honors thesis was published in February of this year in the open access journal PeerJ. That article is the result of research Hoffman did at Appalachian and with the North Carolina Museum of Natural Sciences. He expects the second and final chapter of his thesis to be published within the next month or two; it is currently in a second round of peer review for a different journal. He explains,

"This final chapter is about an extinct crocodylian relative called an aetosaur (~220 million years old) from North Carolina (Coahomasuchus chathamensis). The project is a step towards reconstructing the evolution of growth in these animals and linking evolution of growth rate to changes in the environment. Using thin sections of bone we can tell how old the animal was by counting lines (sort of like the growth lines in trees) that represent yearly cessations of growth. Beyond that we can tell how fast this animal grew compared to other species of aetosaurs and crocodylians." 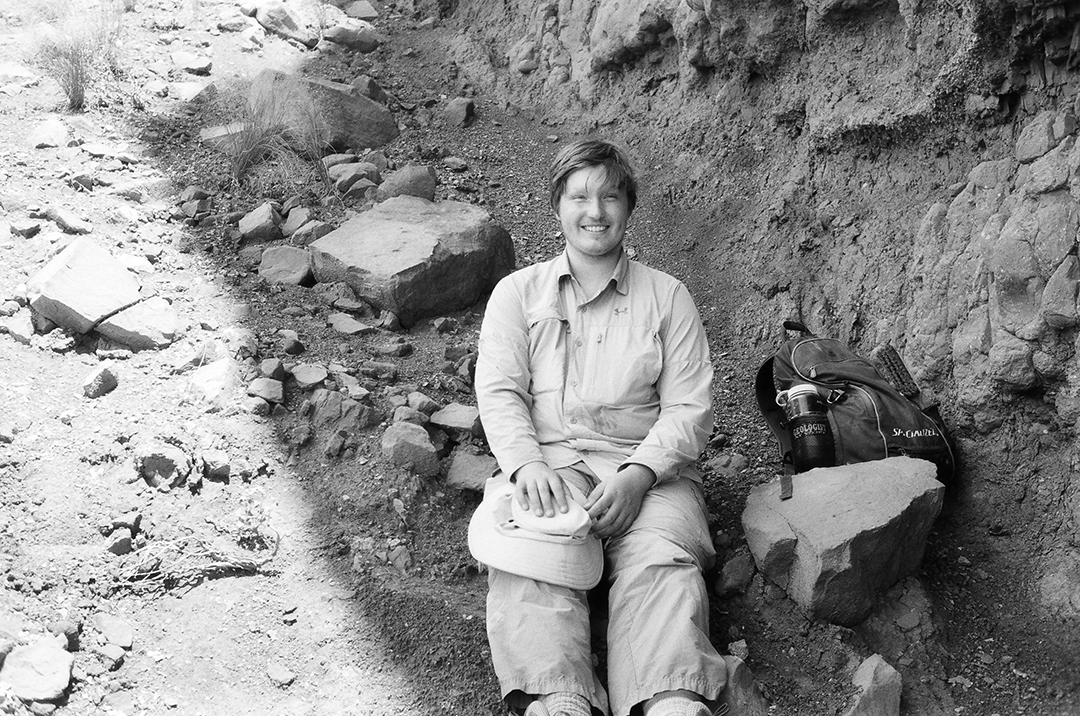 He presented a poster at the Society of Vertebrate Paleontology conference in Calgary, Canada, last August, and he will be giving a talk at the same conference in Albuquerque, New Mexico, this October. He served on the workshop series committee for the Geosciences Student Research Symposium at Virginia Tech, a conference run entirely by graduate students, and also gave a talk at the conference. He received a Geological Society of America Graduate Student Grant to help fund one of his research projects. He has volunteered at a variety of science outreach events, including the Virginia Tech Science Festival and the Radford Science and Technology Festival. He has started mentoring undergraduate students in the Department of Geosciences and is working with undergraduates on several research projects.

Currently, Hoffman is working on a number of different projects and he has limited involvement with even more. He relates,

"My primary focus right is on a project using the teeth of Middle Triassic (~247-237 million years ago) reptiles including relatives of crocodylians and dinosaurs from Tanzania. This time period is really important because it follows by only a few million years the Earth's worst mass extinction (end-Permian) that killed ~90% of all life. The reptiles I am working on represent one of the first full land ecosystems following that extinction. These reptiles belong to a group called archosaurs (birds and crocodylians) that give rise to dinosaurs. Middle Triassic fossils are rare this is a really important site for reconstructing the rise of archosaurs after the end-Permian extinction. Since tooth shape is linked to diet, I am using the shape and features of these teeth to create a 2-D visualization of the different species' teeth and ecology."

Photo below shows Hoffman (far right) next to (right to left) Caitlin Colleary (PhD Candidate), Dr. Michelle Stocker (Faculty), and Brenen Wynd (PhD student). They are standing in front of a 1540 pound phytosaur (large reptile that looked like a crocodile), which they had helicoptered off a mountain. 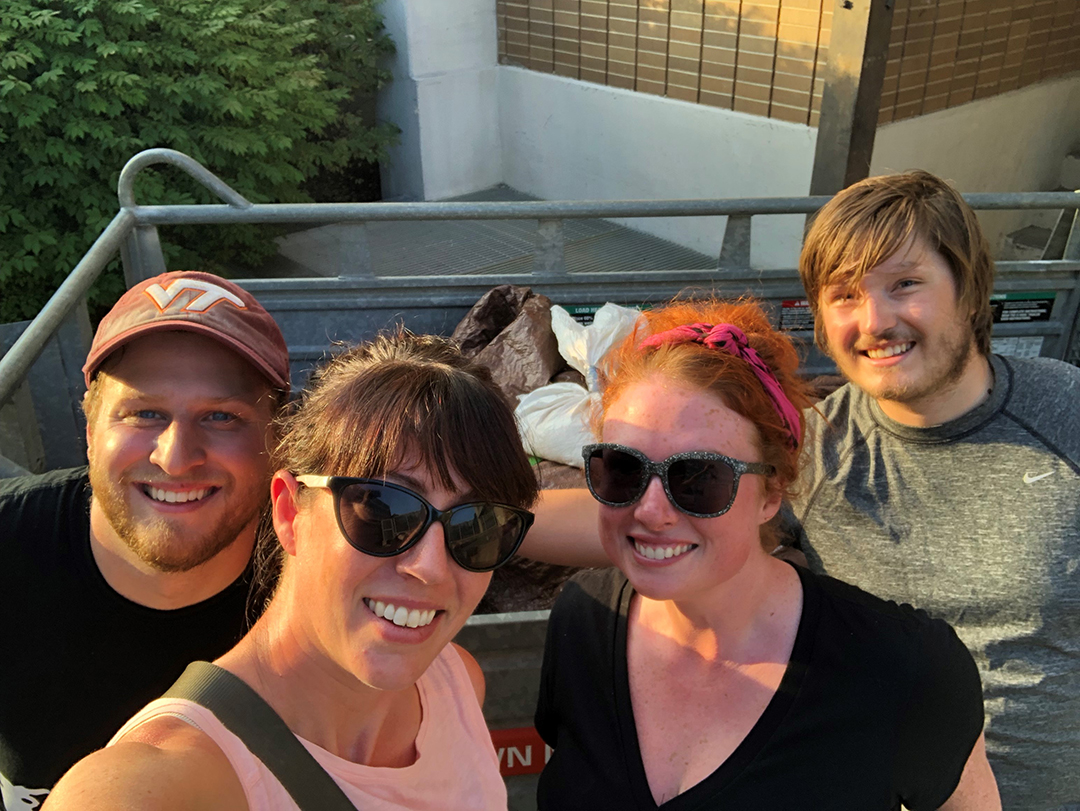 Beyond research, Hoffman recently received an outreach grant from the American Association of Anatomists. With this grant, he is designing and creating anatomy teaching kits for local high school classrooms.

“The program I'm creating will allow local high school teachers to have sets of high detailed casts on bones from modern and fossil animals and use these for teaching both anatomy and evolution," he said.

Hoffman credits his experience in Honors at Appalachian with much of his success. From Honors he came to learn the value of multidisplinary skills and perspectives.

Hoffman said, “Honors College faculty were of major assistance in helping me write and revise large grant and scholarships (Goldwater and Graduate Research Fellowship Program) which not only brought me the funding I use for attending graduate school, but also taught me about framing grants and improved my persuasive writing skills. I also wanted to continue expanding my education beyond a specialized field, something that is advocated for strongly by the Honors College and is a factor in why I am now a member of the Interfaces of Global Change and Academy for Graduate Teaching Excellence here at Virginia Tech. Both these programs link ideas from multiple disciplines and bring students and faculty from across campus to further education, much like the Honors College at App State.“ 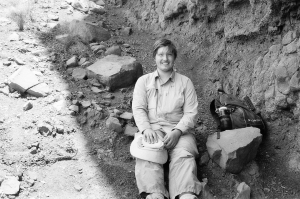 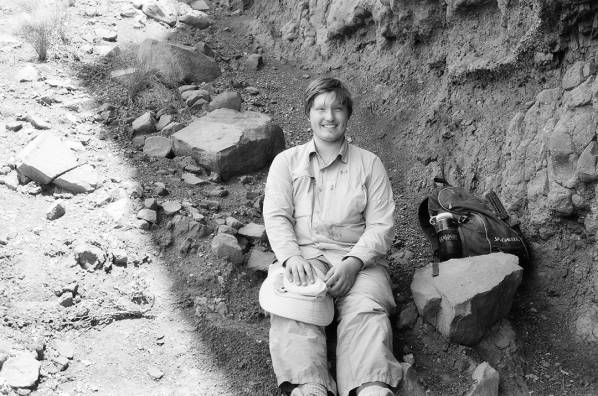