Honors sophomores Grayson Rice and Bailey Sparks have co-founded the #YouAreNotAlone Campaign at Appalachian State University. The goal of the campaign is to spread awareness, build community, and support survivors of sexual assault. They created a website with information about sexual assault on college campuses, local resources to help survivors, and their event schedule.

Rice is a communication, journalism and public relations, major, and Sparks is majoring in elementary education. Their idea for the campaign was spurred by a praxis project in their interdisciplinary Honors seminar HON 2515: Education and the Practice of Freedom taught this Fall 2018 semester by Dr. Greg McClure, associate professor of elementary education in Appalachian’s Department of Curriculum and Instruction. Dr. McClure explained,

"Grayson and Bailey's work on the #YouAreNotAlone campaign was so inspiring. Much of our work in the course was guided by Paulo Freire's notion of praxis, combining reflection and action to change the world for the better. This project was the perfect example of praxis. Bailey and Grayson set out to learn as much as they could regarding sexual assault on college campuses, and then they put that new knowledge to work. Not only did they share their information via the project's website, they also created spaces for our larger community to come together to learn and act through film screenings, support conversations, and collecting resources for OASIS. I can't wait to see where they take this."

Over the course of the fall semester, Rice and Sparks launched the campaign with three major events. 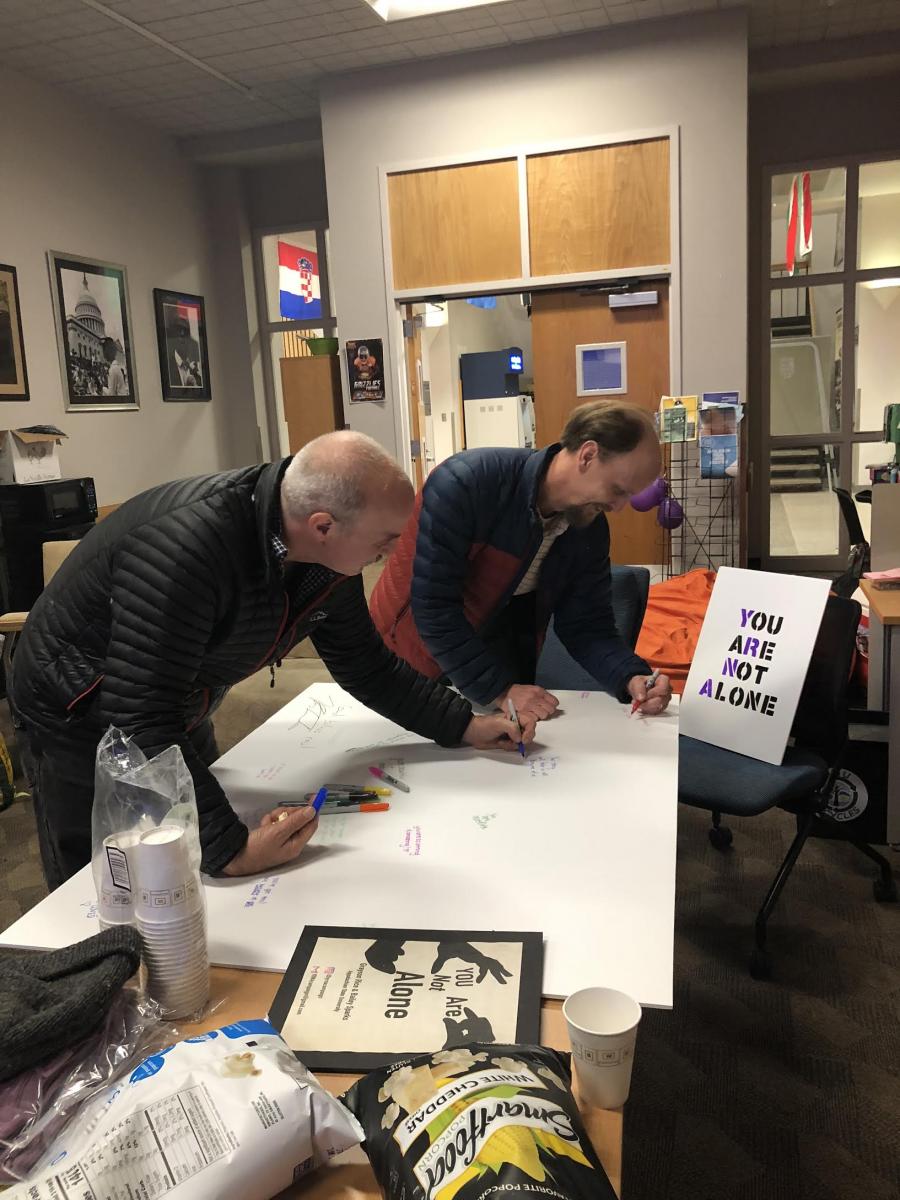 Above, Dr. Greg McClure, and Jeff Goodman, senior lecturer in Appalachian’s Department of Curriculum and Instruction, write words of encouragement to be sent by the #YouAreNotAlone Campaign to survivors of sexual assault at OASIS. Photo submitted. 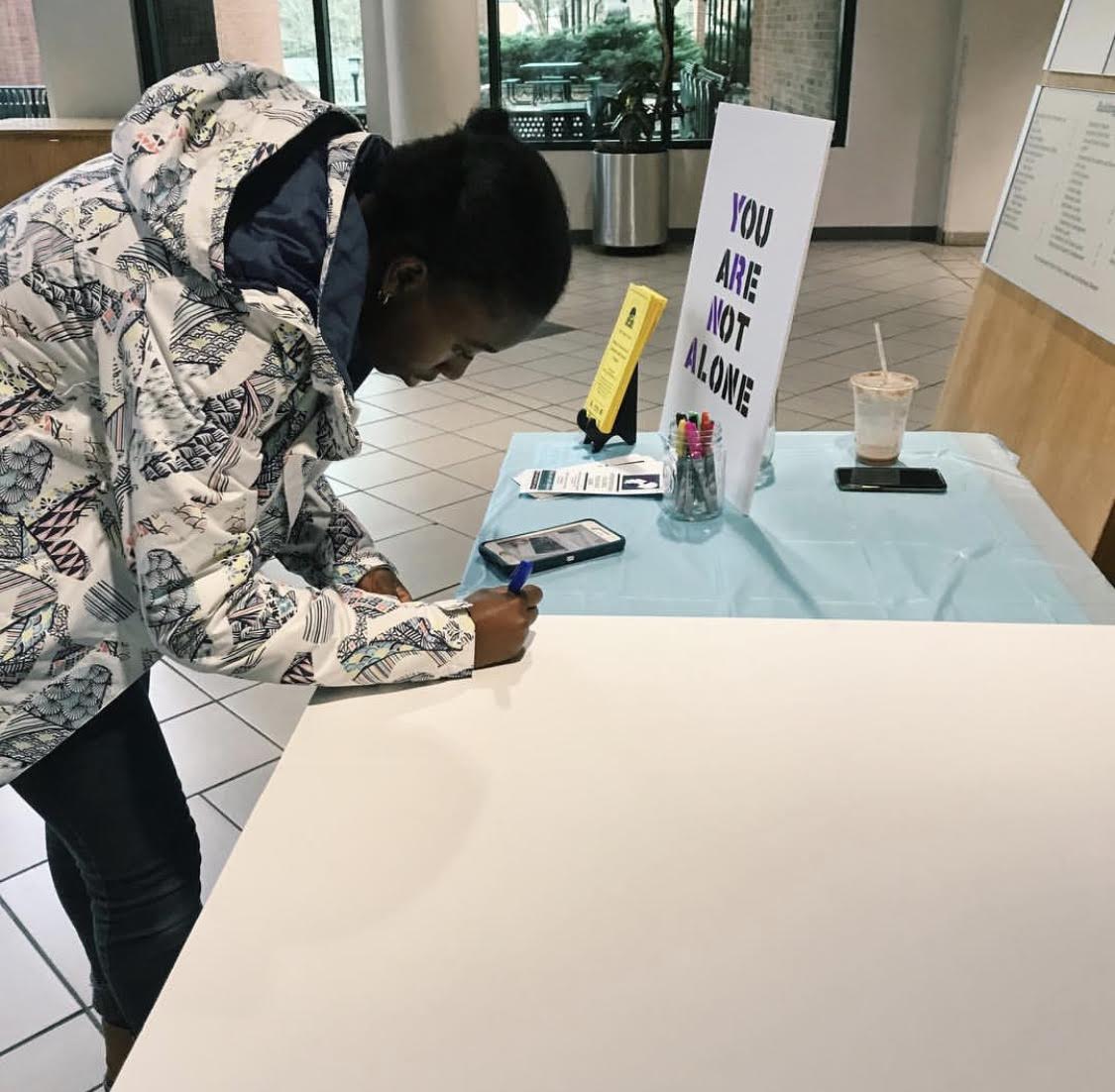 In the above photo, a student visiting the #YouAreNotAlone Campaign information table the Plemmons Student Union on Monday, November 26, 2018. The student is writing words of encouragement that were sent to survivors of sexual assault at OASIS. Photo submitted.

Then on Sunday, December 2, 2018 the #YouAreNotAlone Campaign hosted a Tea Time discussion on the topic of sexual assault on college campuses with Dr. April Paul Baer, Appalachian’s chief Title IX Officer. At this event, attendees also had the opportunity to create crafts and write words of encouragement for survivors at OASIS. 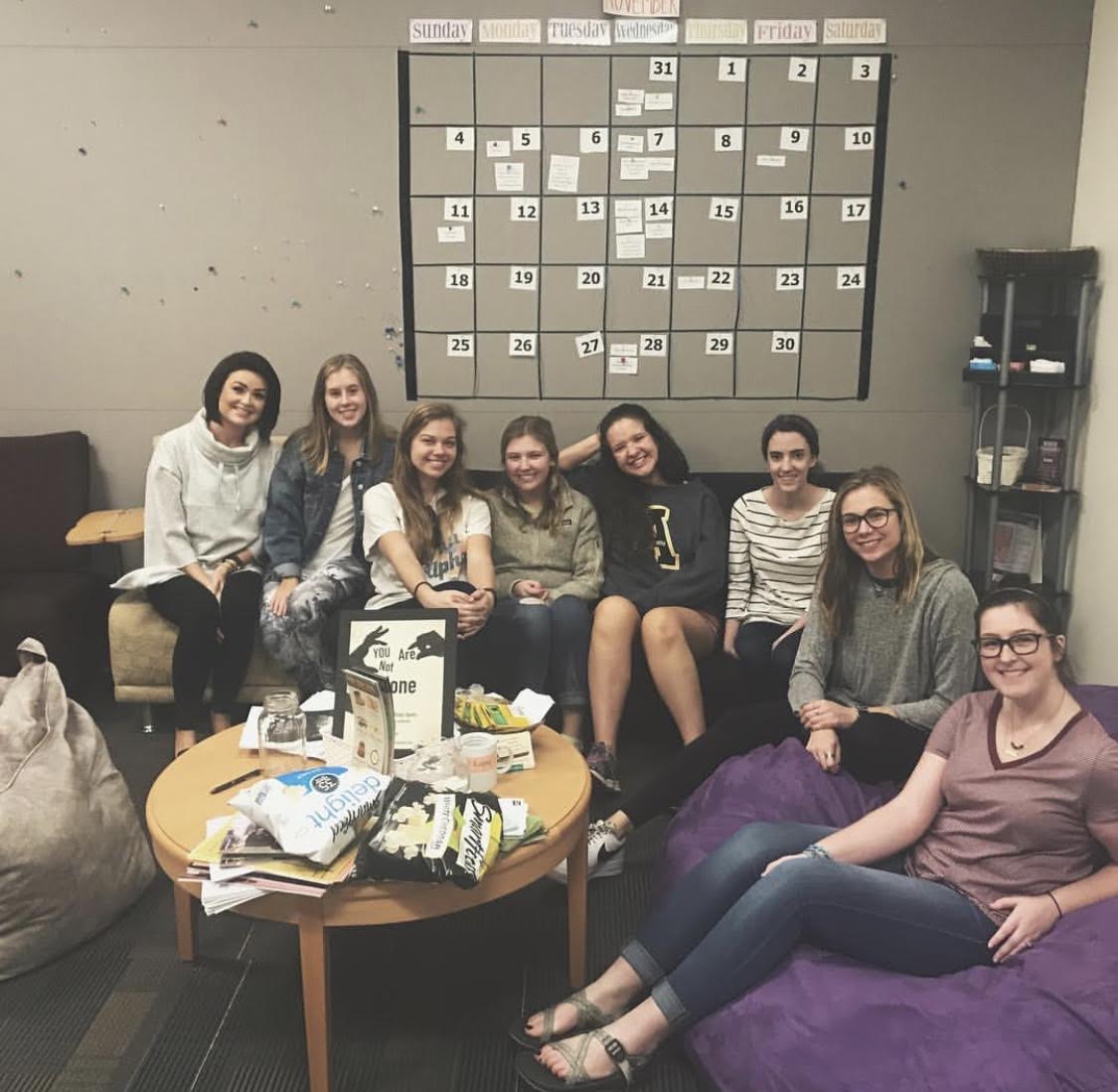 Rice and Sparks met last semester in Dr. McClure’s Honors seminar. Sparks reflected that the seminar was about, “how we can use education to empower students versus the traditional model of education we are used to, which is often disempowering.” The assignments in the course were completely open-ended and student driven. A Sparks further explained, “We could go as deep into the project as we wanted. Students in the class were not motivated by a grade but by being in a community, learning, and creating together. We held each other accountable in that way.” One particular “praxis” assignment was based on the idea of learning in action, reflection on what you learn. For that assignment, Sparks came up with the idea of “learn, share/teach, and do/make change.”

It is with this framework and the support of the class that Sparks and Rice decided to tackle sexual assault on college campuses. Rice works in Appalachian’s Women’s Center so they partnered with them for the use of space and coordinating events. After that, multiple other organizations reached out to partner with them and get students involved including, Planned Parenthood and the Red Flag Campaign.

Now that the Honors seminar is complete, Rice and Sparks are just getting started! They are working closely with Appalachian’s Office of Title IX Compliance and Dr. April Paul Baer, the chief Title IX Officer. About the #YouAreNotAlone Campaign, Dr. Bear said,

"Appalachian is thankful to have students thoughtfully engage in important topics, including fostering a safe, inclusive campus community for all to enjoy. Bailey and Grayson's efforts created space for students, staff, and faculty to talk about ways we can continue to foster healthy dialogue and facilitate processes that are equitable, accessible, and speak to our institutional values."

Rice reports that this is an issue of diversity. Transgender women of color have the highest rates of assault. It is so important that we have organizational support like that of OASIS “creating courage in the conversation.” And Sparks furthered explained,

“Sexual assault creates isolation. Any way we can reach out to survivors to start a conversation lets them know they are not alone, and helps end their isolation.” 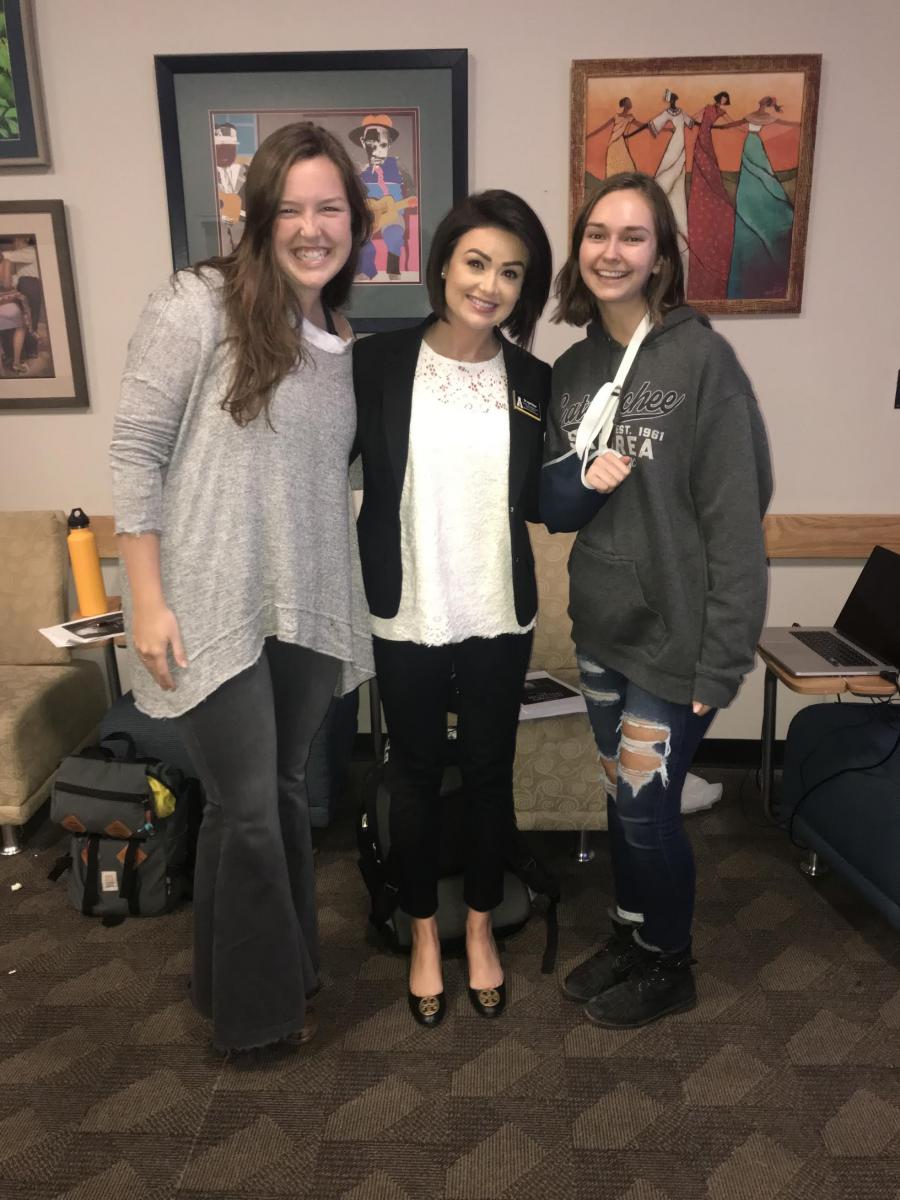 Rice and Sparks are more motivated than ever and have clearly outlined future goals for the #YouAreNotAlone Campaign. Those include: (1) getting more involved with OASIS; (2) continue building community on campus with upcoming meditations and conversations that will be open to all; (3) building support for Title IX sixty day commenting period and informing students about the issues surrounding this significant period that ends on January 28, 2019; and (4) starting a program for student athletes and fraternity members to spread awareness about sexual assault and include these populations with statistically high numbers of accused in the conversation.

These are the transformative, real-life, and service-oriented educational experiences that define the Honors experience. These are most often ignited by Honors seminars like Dr. McClure’s HON 2515: Education and the Practice of Freedom. Rice and Sparks have already made a tremendous impact with the #YouAreNotAlone Campaign. We in the Honors College look forward to watching that grow. 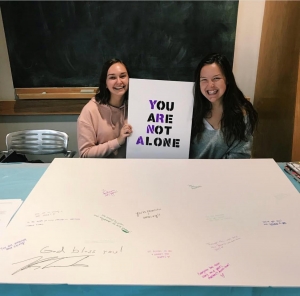 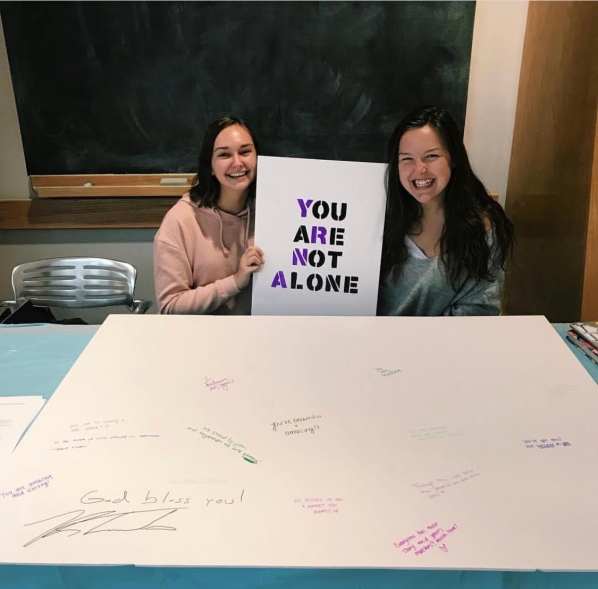